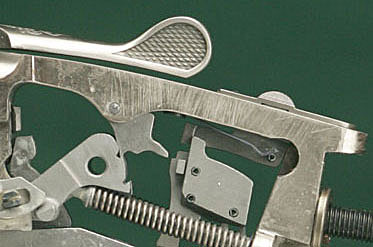 Browning top tang safety. With the upper tang tab in the "Safe" position, the trigger block is prevented from disengaging the sear. A secondary sear should intercept the fall of the hammer if it is inadvertently jarred out of its notch. 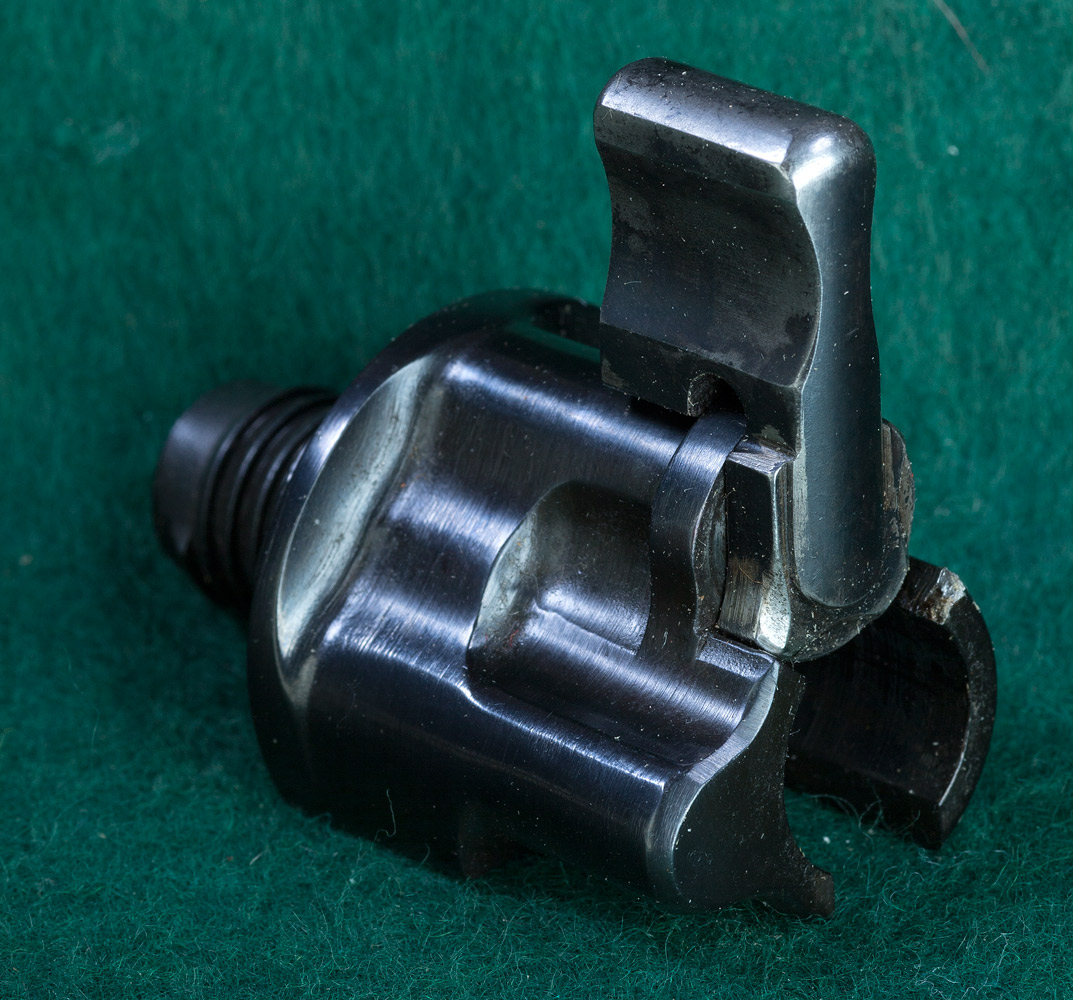 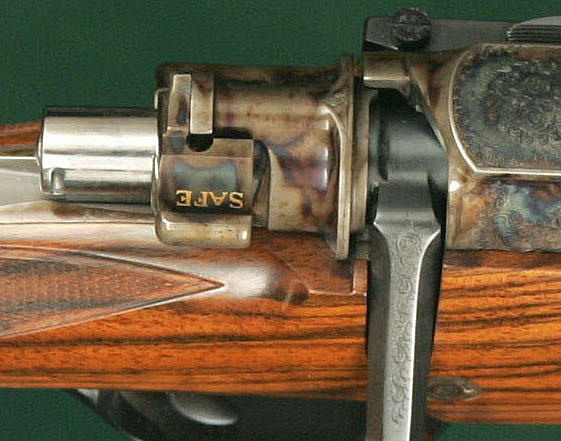 Original Mauser 1898 "Flag" Safety fitted to the cocking-piece that screws onto the rear of a Mauser bolt. When in the vertical or rightward position, it locks the firing pin rearward, irrespective of triggers and sears.

Designed in 1898, before telescopic sights were a practical reality, there was little concern for the fact that this safety's up-and-over arc of movement would require a scope to be mounted excessively high for clearance. 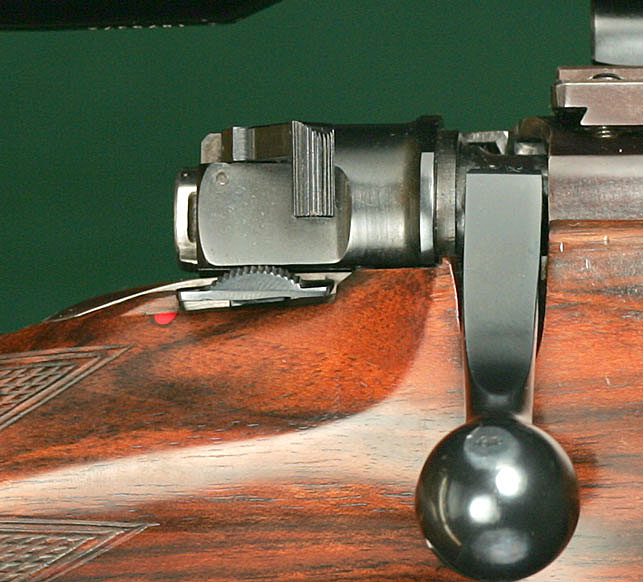 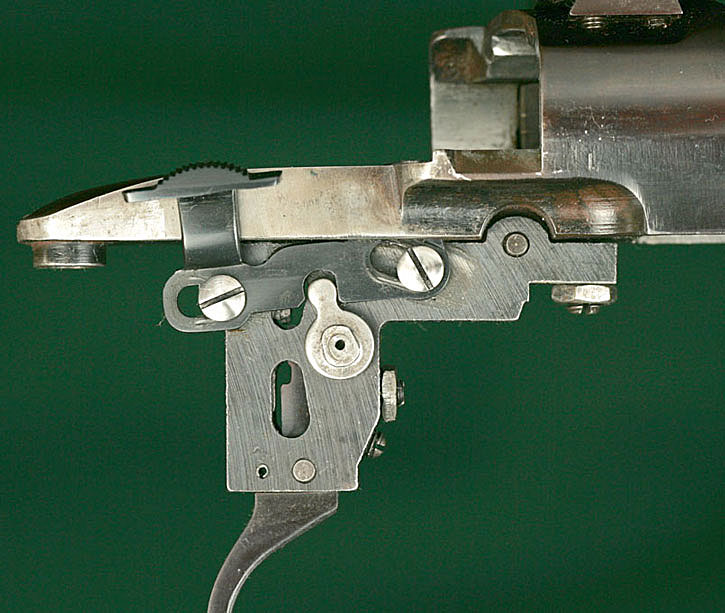 Mauser action with two aftermarket safeties: (1) the Winchester Model 70-type on the bolt shroud, locks the firing pin like the Mauser does, but moves fore and aft instead of up and over, so as to allow a scope to be mounted lower.

(2) the little tab to the right of the rear tang simply locks the trigger. While perhaps more convenient to operate when a quick shot is needed, it is far less safe than the firing pin lock. 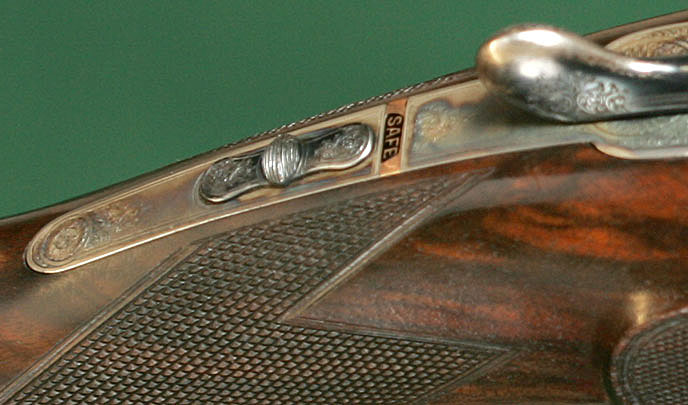 A built-in safety intercepting sear on a sidelock action. In the above photo of the inside of a Holland & Holland back-action lock, the intercepting sear is the long bar, hinged around a screw near the lower right and extending upwards to the left where it presents a notch, ready to intercept the hammer if it should be inadvertently knocked out of its primary sear and begin to fall. Only with an actual pull of the trigger are both trigger-arms lifted simultaneously, allowing the hammer to fall through its full stroke.

Two safeties on a Browning Model 1971. The little swivel tab locks the slide. When the trigger is pulled, the hinged grip safety must be squeezed simultaneously for the pistol to fire. 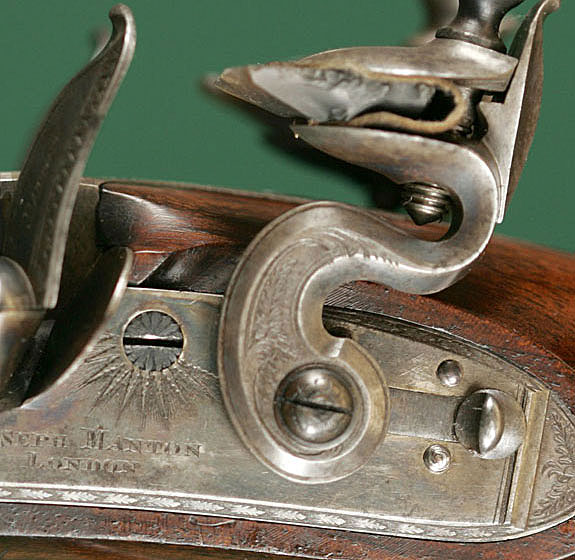 Safety on a flintlock locks the hammer in the cocked position. 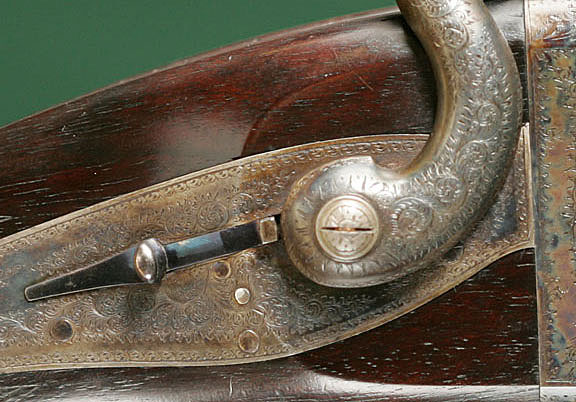 Stalking Safety on an Alex Henry single shot rifle. With the hammer on half-cock, the slide may be pushed forward into a notch in the inside face of the hammer, locking it.

Safety - A device, incorporated into the design of most firearms actions that, when engaged, should prevent the discharge of the firearm. Some safeties are more positive than others. A safety device is not a perfect substitute for the general principles of responsible gun handling. Never point a gun in a direction you do not intend to shoot.

This Single Barrel Trap Gun is built without a safety. Trap is shot from a standing position. The shooter never loads his gun until the moment of firing. Therefore, a Safety would rarely if ever be used and could only have the possibility, if inadvertently set, to cause the loss of a target.